November 1966, I arrived at Rhein Main Air Base, Germany, the “Gateway to Europe” for US military.  A  year prior, troops arrived seasick by ship at the Port of Bremen.  This was the Viet Nam War era and much change was underway. The US Army had to move more troops to more places with greater dispatch, than it had, since the Berlin Airlift in 1949.  I had just completed 4 months of Basic and Advanced Infantry Training at Fort Lewis WA.  We were among the first troops trained at Fort Lewis, since WWII and were dispatched all over the nation and Europe.  Fortunately, none of us were sent to Viet Nam, possibly due to the Army’s lack of confidence in our training regimen.  A better rationale for no Viet Nam assignments might have been that we were a bunch of rag-tag draftees, who were not inclined to be combat soldiers.

There were maybe a hundred of us in a featureless room waiting with our duffel bags for trucks to take us all over Germany. The 2.5-ton, double axil, flatbed trucks with fences and benches were excellent at transmitting every single bump in the road throughout one’s entire skeleton. We were more eager to be there (wherever), than to travel there to see what our new home away from home would be.  Meanwhile soldiers talk and when I said that I was headed to Baumholder, the common response was:  “That’s the asshole of Germany!”.  Not long after that bit of good news, a Sargent entered the room to recruit volunteers for an Airborne unit in Mainz, Germany. His pitch was based on getting an extra $35/month for jumping out of airplanes. Since I had no fear to do so, $35/mn was a lot of money in ’66 and there was the extra bonus, reassignment to Mainz, rather than Baumholder, no-brainer, done, I was in!

Although Hitler’s Autobahn inspired Eisenhower to construct our Interstate Freeway system, many of the city streets in Europe were still paved with cobblestones.  So, this soldier was bumpty, bump, bumping down the cobblestone streets of Frankfurt, taking in the sights and smells of this new country 5,000 miles away from home on his way to Mainz, just another 25 miles down the road.  The US fortress in Mainz was a walled kaserne, which was more like a college dormitory, than a military barracks, very nice.  There were 4 soldiers to a room with wall lockers compared to 30 – 50 troops to a room with footlockers.  I was feeling very smart about my decision to volunteer for Airborne.  Never mind that the benefit of being naïve is that one is allowed comfort and freedom from concern, when that luxury wouldn’t otherwise exist.

When my greeter opened the door to my new room, I struggled to conceal my shock.  I was going to have not just my first black roommate, but my second as well and a Hillbilly from West Virginia to complete our military quartet.  After 13-plus years of Catholic education, I knew well that all men (and women) were created equal, but my belief had never been tested.  The greatest threat in my sanitized, homogenized Seattle neighborhood was an occasional personal skirmish with the non-Catholics.  My high school of 1200 students had only one black student in 4 years and she was two years ahead of me.  Remarkably, there were hardly any blacks in our training unit at Fort Lewis.  Those fresh draftees were mainly white Puget Sounders, who had lost their Student Deferments, due either to dropping-out of college or getting kicked-out of college, like myself.  Frankly, I was probably more of a snob, than I was aware because Dodd the Hillbilly was nearly as trying for me as Dixon and Thomas, the blacks.  Suddenly, instead of feeling smart, I felt more alone, than I had ever known. 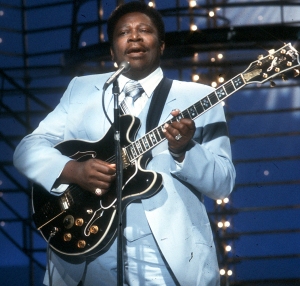 Charles Dixon, a handsome, self-described “Lady’s Man” with 4 civilian   tailor-made suits in his wall locker, was our icebreaker.  He had a hi-fi with only one record, BB King Live at the Regal.  Dodd and Thomas rolled their eyes at each other because they had already heard Live at the Regal too many times.  I had not and BB’s blues surely resonated deeply within me.  Eventually, like Dodd and Thomas, I grew weary of hearing BB over and over and over again.  However, two years later, I returned to the “World”, as ethnocentric troops stationed abroad referred to home and had the opportunity to see BB at the Paramount Theater in Seattle.  Like volunteering for Airborne, I was all in.  My BB recollection was rekindled into a lifelong love affair.

Neither photo, nor script can truly do justice to the experience.  So, in tribute to the recently passed away and World Famous Blues Musician, who  picked cotton with his guitar strumming fingers as a sharecropper’s son, follow link:  Blistering Blues Concert BB King 1987 , where a terrific lineup of musicians appear with BB, perform solos and play the best version of The Thrill is Gone that I’ve ever heard.  Be sure to watch long enough to hear the mesmerizing guitar duet performed by BB and his very good friend Eric Clapton.  Note the essence of BB in the last line of Thrill is Gone:  “Now that you’re gone, all I can do is wish you well”.  He could sing the blues, but he always came out positive on the other side.

Still thrilled and touched, thank you BB for providing a lifelong blues elixir of soothing comfort!

Look for future post, My Clairvoyant Dream, on how I got to Germany.